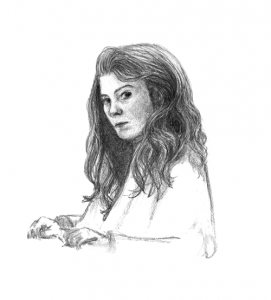 Alejandra Díaz Bouza was born in Ferrol, Galicia (northern Spain), on a summer day in 1985.

She became a voracious reader of books and manga, an insatiable moviegoer, from a very young age. From her first set of pencils and sketchbook she built a hideaway for creating stories. She’d often look up at the stars and see sketches, stories and legends —some timeless and universal, others waiting to be told —that sparked her interest in astronomy and the decision to study a bachelor’s degree in physics while training as a storyteller.

After completing her undergraduate studies in physics, she moved to Madrid to pursue studies in graphic design, drawing and illustration, and creative writing.

Alejandra became involved in various projects related to promoting reading and illustration events, where she finally found the SCBWI (Society of Children´s Books Writers and Illustrators of Spain). She went from volunteer for the association to Regional Advisor of the Spanish region. Currently she is also a volunteer and member of MÍA society (Mujeres en la Industria de la Animación or Women in the Animation Industry, Spain).

She published her first middle grade book, “Trece días para arreglar a papá”, in December 2019. She works as a freelance illustrator since then.

This web site uses cookies to help us improve and protect our services. By continuing to use the site, we understand you agree with our privacy policies.

Ok! AcceptNot acceptLearn more about this

We may request cookies to be set on your device. We use cookies to let us know when you visit our websites, how you interact with us, to enrich your user experience, and to customize your relationship with our website.

Click on the different category headings to find out more. You can also change some of your preferences. Note that blocking some types of cookies may impact your experience on our websites and the services we are able to offer.

These cookies are strictly necessary to provide you with services available through our website and to use some of its features.

Because these cookies are strictly necessary to deliver the website, refuseing them will have impact how our site functions. You always can block or delete cookies by changing your browser settings and force blocking all cookies on this website. But this will always prompt you to accept/refuse cookies when revisiting our site.

We fully respect if you want to refuse cookies but to avoid asking you again and again kindly allow us to store a cookie for that. You are free to opt out any time or opt in for other cookies to get a better experience. If you refuse cookies we will remove all set cookies in our domain.

We provide you with a list of stored cookies on your computer in our domain so you can check what we stored. Due to security reasons we are not able to show or modify cookies from other domains. You can check these in your browser security settings.

We also use different external services like Google Webfonts, Google Maps, and external Video providers. Since these providers may collect personal data like your IP address we allow you to block them here. Please be aware that this might heavily reduce the functionality and appearance of our site. Changes will take effect once you reload the page.